Getting Arrested in Gansu, China 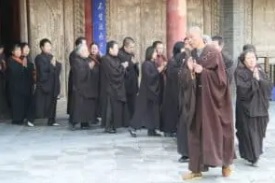 My short story about travel experience is from Asia. On our first trip to China, one of the destinations my husband and I were most looking forward to, was visiting the Labrang Monastery. Located in remote Gansu province in the west of China, Labrang is a holy site and a place of pilgrimage for Tibetan Buddhists.

At that time, neither one of us spoke any Chinese, and we were finding it frustratingly difficult to get where we wanted to go. We didn’t understand why all the bus drivers were refusing to let us get on the buses heading towards the transport hub from where all onward transport to Labrang left.

When one of them finally did let us on, he then forced us to get out on the outskirts of town, well before we had reached the bus station. Confused, and not knowing what else to do, we started walking in the direction we thought the station was in. We didn’t get far before two police cars skidded to a halt next to us, and we were suddenly surrounded by six cops wearing S.W.A.T. badges on their sleeves.

They brought us to the head of the prefecture, who luckily was a very friendly Tibetan man who spoke enough English to explain what was happening. Unbeknownst to us, the Chinese government had recently made that part of Gansu off-limits to foreign tourists in light of protests by ethnic Tibetans in the area.

After treating us to a tasty lunch of vegetarian Chinese food, the head of the prefecture drove us back across the prefecture border himself and made sure that we got on a bus back to where we had come from.

We never made it to the Labrang Monastery on that trip, but at that point, we were just happy not to be in a Chinese jail. As I write this, we are in Mongolia, planning to cross back into China in a couple of weeks. We have been told that Labrang has reopened for foreigners, so 10 years later we are going to give it another shot. Hopefully, we don’t get arrested this time and we will only have amazing travel stories to share!

View all posts by Mark →

No comments to show.